To be honest I was always confused when I heard people talk about “baby turtle releases.” I thought, “sure you are releasing them, but why do you have them in the first place? Are you just catching them to release them?”

Maybe this is common knowledge, but I can finally say after our experience releasing baby turtles in Puerto Escondido Mexico, I get it!

The Momma sea turtles haul themselves up onto the beach after making sweet turtle love in the waves and using their hind flippers dig a large circular hole in the sand. They position themselves above the hole and lay between 80 and 200 soft-shelled, mucus-covered, ping-pong sized eggs into it. Knowing she has to leave these little guys for good (she is a sea turtle, not a hang out on the beach turtle) she covers the nest of eggs with sand, re-sculpting and smoothing the surface, and then camouflages the nest with grasses until it is completely hidden. With that her motherhood duties are done and she returns to the ocean.

We saw this step about four years ago in Costa Rica, but until now I didn’t realize what the next steps for these plucky little independent baby turtles would be. The turtle sanctuaries or other concerned citizen collect the eggs and moves them into a doubly protected area for their incubation time of anywhere from 50 – 60 days. Each species of turtle’s eggs incubate for different amounts of time so after observing what type of Momma laid each nest, they know when to start looking for some movement.

Once the baby turtles hatch they are collected so that they can be released to make their run towards the ocean when they have the best chances for survival. In this case, they hatch sometime before noon, but if they tried to make it to the ocean then the vast majority would die from heat, birds or other predators. Then many more will succumb to ocean predators once they do reach the water. Releasing them at sunset gives them a better chance as it is not so hot, it is much harder to spot them (they are tiny!), and many of their predators have called it a day at that point and aren’t lurking nearby looking for turtle treats. 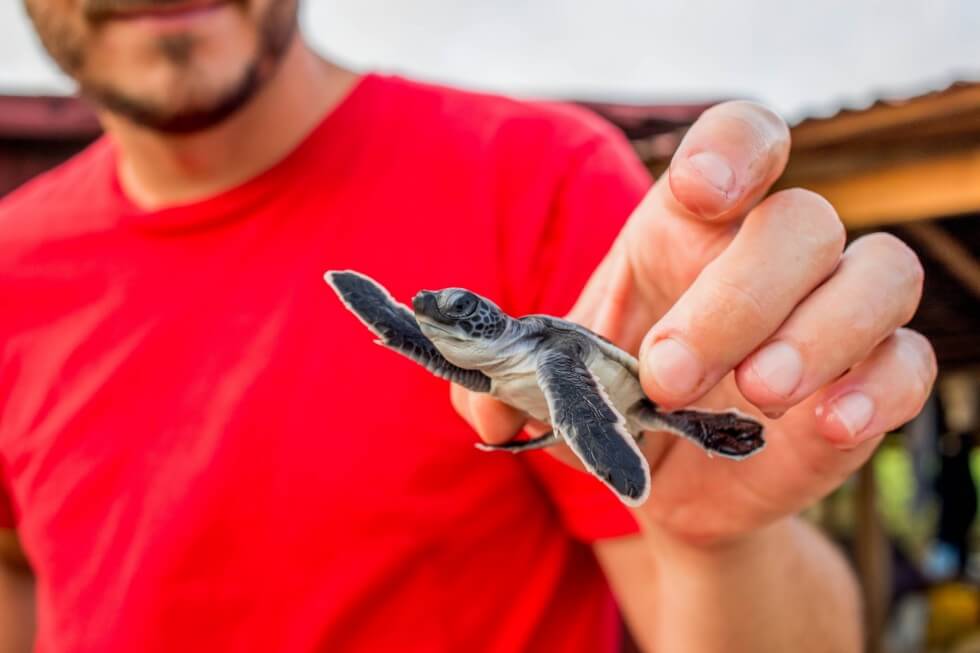 Based on the recommendation of Hecktic Travels, in this post we e-mailed Gina to book the baby sea turtle release. She told us that she could let us know by noon each day if there would be a release that night. Obviously there needs to be hatchings in the mornings to have releases in the evenings.

We got the go-ahead on our chosen day and the taxi came to pick up the four of us, we were sharing a house with our friends Simon and Erin at the time, at about 5:15pm. We got out to the beautiful stretch of beach and were introduced to the gentleman who seemed to be the one-man-show of the entire conservation project on that beach and to the freshly hatched Sea Turtles who would be starting the journey of a lifetime that evening.We are talking buckets-full of cuteness. After we all washed our hands to make sure that there wasn’t any lotion or soap residue on them we had a little meet and greet with the babies.

Afterwards, while we were waiting for the sun to dip lower we were shown the nesting sites and had the whole process explained to us, along with many facts that I was too excited to process about the different types of turtles that lay their eggs in that area. The four of us had a great time playing on the beach and working out some of our enthusiasm while we waited for the sun to set.

As the sun drew closer to the horizon we brought out the sea turtles and laid them all out so that they could start their journey towards the ocean. The friskier ones perked right up when the first salty breeze hit their little nostrils. They started making tracks, heading straight into the crashing waves of the huge Pacific Ocean; fearless.

Some of the other ones took a little longer and seemed to be like any other species of sleepy little babies. They just couldn’t keep their li’l eyes open long enough to start walking. They would take a lumbering step or two and their little lids would shut heavily back into a deep sleep. The guide encouraged us to pick them up and put them back down to wake them up, hoping that the wind created by moving them would draw their attention to the siren-call smells of the ocean.

After the sun had completely set and the light was failing the last couple of stragglers needed to get directions from Simon about what they were supposed to be doing. But they all made it to the waves, every last one. And from the very first one into the ocean to the very last, as soon as the water hit them they were ready. Ferociously paddling their arms and legs to take them farther out into the sea.

Crouching on the beautiful and almost deserted stretch of beach as the sun set was one of those moments where we have to pinch ourselves. Not to make sure we aren’t dreaming but because if we smile any wider we might split our faces and need to drive our giddy excess energy somewhere else. A pinch works beautifully in these types of situations. You may need to employ that method yourself while watching the video Tom took that day.

The baby sea turtle release Puerto Escondido season runs from late October until May. We booked the tour through Gina by e-mailing her at [email protected]. It was 500 pesos for the taxi to take us there and bring us home, which was split by the four of us. The price is per car, not per person.

At the end of the evening there was a little awkwardness as we weren’t sure who we were supposed to pay for the “tour.” We thought that some of the 500 peso fee would be going to the turtle sanctuary, but our taxi driver let us know the cost was just for the transport, but that we should tip the guy who runs the project as an employee of the Mexican government. We all happily tipped him, but it was not like other conservation projects we have visited in the past, such as the Elephant Nature Park in Thailand, where it was very clear that the money you were paying was going to help the animals and to keep the center running. It seems like the fee we paid just goes to the taxi and then you can tip the worker for his help and information.

Had we known that, we may have rented motor bikes or even a car to drive out there ourselves and then given the guy working with the turtles all of the funds. We definitely don’t mind paying for transport, but it did not feel as transparent as it could have. We also wouldn’t have minded donating some money to the Mexican government to keep this project going.

All in all if you are in Puerto Escondido you should definitely to this because to quote Simon, “they are totes adorbs.”